Everything Is Not Great (Or Awful)

A ton of stuff has happened since I posted last, including the release of the cover to Scott Pilgrim volume six, along with the official movie poster. Oh, and Chris Evans was confirmed as the actor playing Captain America in the film, but I'm going to skip all of that and talk about something else instead.

A posting over on Robot 6 led me to another posting, this one by blogger Erin Polgreen, where I read about Mark Millar potentially being a racist and/or sexist. The comic book world is a small one, and generally you can have contact with almost any creators - there are exceptions - and if you don't, then somehow, someway your words can find a way to reach the ears they are addressing. It's a concern as old as the concept and practice of journalism itself, but one that hasn't decreased in relevance today.
How much should a journalist (or commentator, observer, critic, whichever adjective is being used) allow the reception of his/her words to affect which words are put forth?
I've read countless issues of Wizard magazine filled with unbounded praise, limitless kind words regarding anything they decided to write about. I can't remember a single time I read an article or feature critiquing an artist or writer's work, giving an unfavorable review of anything. The argument has been posed that to go out of their way to pan comics would be counterintuitive; why not focus on the good, or entertaining ones?
I've always been a member of both modes of thought. The positive is great, but it is made relevant by the negative. Everything is not great. But, and this is really important, everything is not awful.
- • -
My first experience with a Mark Millar book was "Red Son," published by DC. I loved that book, and still do to this day, although my love of it is starting to seem weaker each year if for no other reason than my enjoyment of other Millar works has been either minimal or non-existent. It's not that I can't enjoy a single entry in an author's oeuvre while simultaneously being underwhelmed or disappointed in the rest. I haven't read "Red Son" in a few years, and I'm starting to wonder if my level of enjoyment will be less than it was originally.
Miss Polgreen discusses in her article the reasons she thinks Mark Millar is racist and/or sexist. Although she brought up some great points, and discussed pieces of Millar's past writings, I found myself wondering if I read comics with the same mindset she, and other critics, need in order to come up with these thoughts regarding the works. Initially I thought no. So instead of reacting to her accusation of Millar's sexism and racism I went into a bout of navel-gazing. Maybe that's what writing is supposed to do, maybe not. Either way, I wondered if I did (or could/would) read comics in the same way Polgreen was.
I hate to say she was searching for the offending bits, because her reading habits or practices are completely unknown to me. The only reason a thought like that even comes up is because when I read a comic I am somewhat disconnected, meaning that I usually try to switch my critical mind off. It's not always easy - markedly so when the comic isn't good - but I try to arrive at a place where I feel as if I am inside the world being created for me.
- • -
Mark Millar has done plenty for me to dislike him as a writer; I don't know him personally. "Kick Ass" was optioned to become a film before the first eight-issue story was even on the shelf; hell, before the first three issues were more than an outline. He started a comic called "War Heroes," with an entire year separating the publication of the first and second issues. He has all but abandoned the comic book world, and these are the most glaring offenses I think of when I think of Mark Millar, or his comics.
Sexism and racism are much harsher condemnations, I think, and not that I necessarily avoid those labels, but they tend to not surface in my mind right away. After reading Miss Polgreen's article...I dont' know.
In issue eight of "Kick Ass" main character Dave Lizewski tells the girl he's been lusting after that he was in fact pretending to be gay to get closer to her, and Millar tricks the reader with a false account of her fawning over him, saying how glad she is that he's finally come clean. THEN. You hear the real account, where she tells Lizewski how pathetic he is, and sends him a picture of herself blowing her boyfriend, whom Millar goes out of the way to categorize as some certain ethnicity other than white.
Although I didn't read this and immediately think, "Whoa, racist AND sexist," I did decide that "Kick Ass" was no longer a book I'd read. Up to then I'd already been getting marginal enjoyment out of it, so the loss wasn't huge.
Read Polgreen's article and see what you think. Although Millar seems to be repeating himself with the amount of potentially racist or sexist material he puts in his books, it's dangerous to label a creator as either when it is their characters delivering the evidence. On the other side of that coin, if a creator puts enough racist, sexist, or some other offending bit into their work on a regular basis, can the reader/viewer/consumer make an educated guess about their beliefs?
Posted by Hideous Energy at 9:10 AM No comments:

One Reason To At Least Look At the 'Unwritten'

If you weren't already paying attention to Vertigo's ongoing series "The Unwritten," maybe this image will convince you to do so. 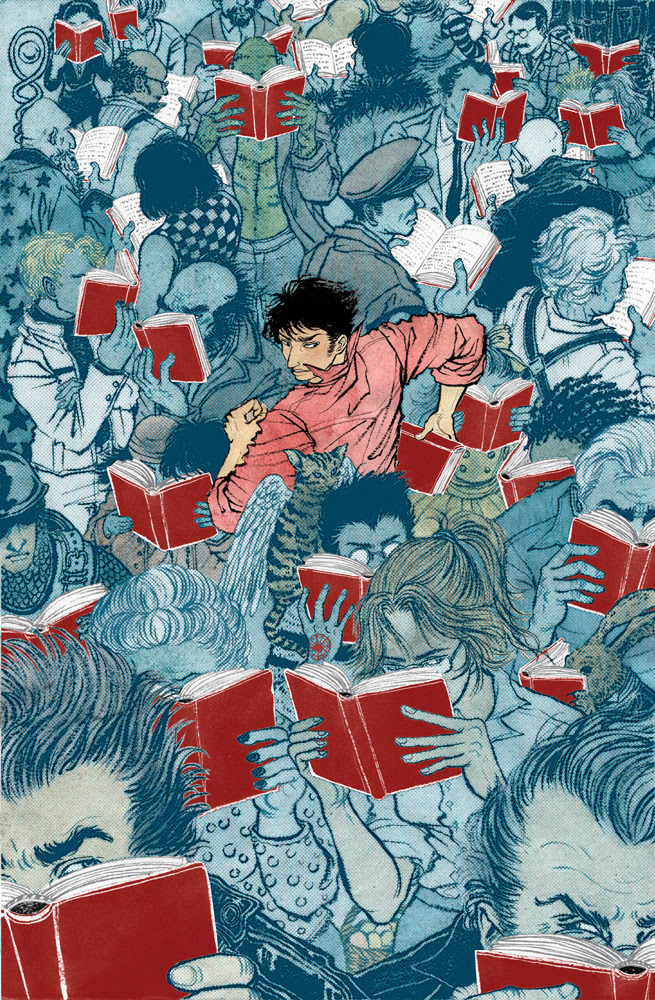 Drawn by Yuko Shimizu, this is the cover to issue fourteen of the series. This is one of those covers that makes me really want a comprehensive book to be released containing all covers of a series. Some fans would surely have a problem with this, and avoid purchasing the thing because they are in essence buying the same thing twice.
There are various ways around this, including special features, which are increasingly included in compilations/trade paperbacks/graphic novels now. These could include a multitude of items, but the ones that come to mind first are interviews with the artist, examples of the process such as thumbnail sketches, rough layouts, pencils, inks and so forth. I would definitely buy one for certain series I follow that are still active, and for some that have finished.
Vertigo has released "Fables Covers: The Art of James Jean Volume 1," but this seems like the exception. I would definitely buy a book of covers from "Y: the Last Man," "Ex Machina," and "The Unwritten." Maybe Vertigo has plans of doing this, but "Y: the Last Man" has been finished for some time now, and "Fables" is currently still running. There surely is some sort of mathematical formula out there to prove this means the James Jean book is a fluke.
Posted by Hideous Energy at 7:04 AM 1 comment:

Two Reviews For You

Oh Wednesday. If I were a little more poetical (?) I'd write a sonnet to you. You're the perfect middle to my week...like a double-stuffed Oreo. Instead of poetry, though, you get sad comparisons to food.
Every Wednesday I get new comics. The number usually differs, but there's always at least one, and I dread the day when there isn't even that. I'll probably end up buying a trade or graphic novel, out of the need to feel like it's actually Wednesday.
This past Wednesday - March 3 - I took home five comics, along with Absolute Sandman Volumes 3 and 4, along with the Absolute Death. I had to make two separate trips from the car to the house in order to carry all the stuff (yes, I also picked up some groceries, but nevermind that, it ruins my reminiscence).
Here are the somewhat short synopses/pseudo-reviews of the two books that hit me the hardest on this latest Wednesday.
Stephen King's "N" #1 - Written by Marc Guggenheim, penciled by Alex Maleev.

"N" started out as a short story published both in book-form ("Just After Sunset"), and on the internet as a "webisode," which might be the dumbest name for what the thing actually was, which we know as "motion comic" (itself a pretty derivative name). Now, after enough time that "N" was sort of fading from memories - or mine, anyway - Marvel presents the first issue of the comic book adaptation, which is based on the motion comic, which was itself based on the short story. Marc Guggenheim did the adaptation from short story to motion comic, and now he's doing the adaptation from motion comic to actual comic book. So he's adapting something from an adaptation he did based upon a Stephen King short story.
This sounds like a perfect way to convolute the process or miss the mark, but the comic book version of "N" arrived as a well-made piece of fiction. The story follows three story lines; that of the Ackerman family, the Bonsaint family, and the psychiatric patient known as "N." Again, this sounds very convoluted. Here is a very simple breakdown of the plot: "N" visits the site of the old Ackerman house, which was destroyed, killing some of the family, the others perishing at the end of a shotgun held by Papa Ackerman, who then sucked on that very same barrel and went on a buckshot ride. While at the site of the grisly murders/suicide/strange destruction, "N" notices that where the house stood there are seven pillars. He goes to take a picture, and through the lens of his camera realizes there are actually EIGHT pillars.
Insanity ensues, and it is King, Guggenheim, and Maleev's intent to drag the reader into the nuttiness, and so far, I'm right there with them. Issue two is definitely on my to-buy list.
"First Wave" #1 - Written by Brian Azzarello and penciled by Rags Morales

This might be the week for books that seemed outrageous in concept, but delivered the promised results. "First Wave" isn't a team book, not yet, but one can certainly see the beginnings of a team. This book stars Batman, Doc Savage, the Spirit, the Blackhawks, Black Canary, and a cadre of sidekicks for each of those, not to mention the villains that we haven't really seen at this point.
That's a lot of characters to start out with. Brian Azzarello (most famous for "100 Bullets) doesn't seem daunted. He puts the pieces in place in this first issue, and delivers a book that reads exactly how it should: like a weird, alternate universe/Elseworlds tale where Batman is alive during the non-specific timeframe that looks somewhat like 1940s New York, but has some tiny modern touches as well. The reader gets crime, noir, and humor (the last compliments of the Spirit), and is left after 22 pages feeling as if they went on a very short, but very promising ride that is being built piece by piece every month.
I had to read this one twice, and am planning on a third time. The amount of characters leads to huge overlapping story lines, and is a little intimidating. If this book goes downhill in the future it will be because Azzarello cannot juggle all of the simultaneous stories, but as of now, I'm willing to watch and see if he can succeed.
Posted by Hideous Energy at 8:38 AM No comments: