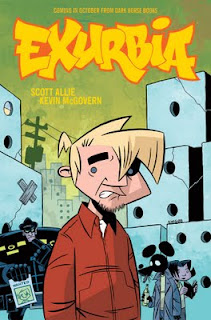 SA: "Two real different questions. One the one hand, MDHP is there to promote books we're publishing, like Conan, which is in there this month. On the other, it's an anthology of its own, meant to offer compelling material to keep people coming back, and to offer the variety and inventiveness that only anthologies can give you. Which is why we have NuMeat, by Cody Goodfellow and Jeff Wamester in there right now. In terms of getting your work noticed—if you mean by me, an editor, or a publisher, I'd say work your ass off, put a lot of stuff online and maybe self-publish, and show your work at conventions. And be amazing.
HE: How much of your time at conventions is spent reviewing art and/or pitches? Also, is there a set time hopeful creators are expected to present their material, or is it less formal?
SA: Depends on the convention. At San Diego, [Dark Horse Editors] Chris Warner and Randy Stradley have valiantly offered/insisted on spearheading portfolio review, so I do relatively little there, although a lot of people catch me in the booth, and there are a lot of people whose stuff I've looked at every year for a long time, and I make time for them. But at other shows where I'm the only editor, I'll spend a few hours a day. Could spend all day, but it wears on you, and there are other things I have to do at a show. Portfolio review can easily eat up a weekend.
HE: Buffy the Vampire Slayer is a huge part of your publishing roster, yet Angel currently resides at IDW; do you know if it's Dark Horse's goal to bring Angel over?
SE: "I've often said I regret letting it go, and I'd love to bring it back, but unfortunately it's not up to us."
HE: Can you reveal who it is up to, or is that a secret of The Whedon?
SA: "Oh, no, nothing like that. It just is what it is."
Posted by Hideous Energy at 12:07 PM