#011 - More Lies (and arguments about eyebrows) 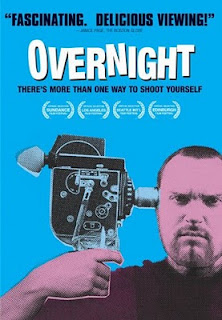 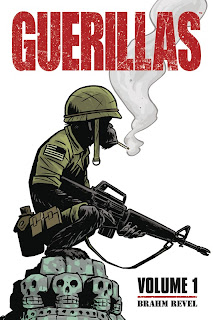 There are times where our minds strike back against us, and force us to discuss things like record stores and DVD stores, rather than comics. Follow us on Twitter to get more of this, and be our fan on Facebook, and especially talk to us through hideousenergy@gmail.com. iTunes is now a proud sponsor of Hideous Energy, because they let anyone put a podcast up there!

David Hopkins and Austin Wilson are now conducting polls regarding eyebrow hygiene. They know no shame. What better way to cap off a show of 1:11:02 running time than with a discussion about eyebrows? Please continue to love us. We really can't go on without you.

Recently we posted about a great webcomic called "Sacred Heart," and the writer/artist Liz Suburbia recently updated her blog with new pages. They aren't posted on the official "Sacred Heart" site yet, but you should go check them out on her blog.

The "Sacred Heart" kids are having a party, and so far Suburbia has perfectly captured the mad cacophony that a house party tends to bring into existence. There are odd rhythmic swells in sound, where conversations wax and wane, and this shapeless mass of people accidentally become synced up somehow, talking and moving and all looking for something similar if not exactly the same. She effects this feeling of being there, of having the party buzzing in your ear in such a believable way that you can't help but recall the last house party you survived.

Maybe the only downside to this is the pages fly by so quickly. The pace created by a party scene where a million people are doing a million things pushes your mind to take the information in faster and faster. Not that this is such a bad downside. I've re-read the pages a few times, and every time I end up smiling, remembering shouted conversations and all kinds of fun and boring and annoying and forgettable shit from house parties gone by.

-Austin
Posted by Hideous Energy at 9:14 AM No comments: 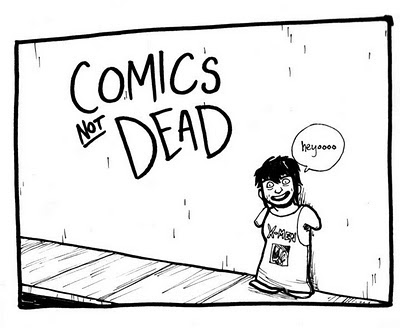 Webcomics are pretty freaking awesome. If you're not reading any, you should be. The Hideous Energy folk (Austin) read Sailor Twain, FreakAngels, and of course Penny Arcade, which is sort of the linchpin for any good nerd's Enjoying Webcomics portfolio. Since the internet is starting to creep into everything - Blu-Ray players now know where you are at all times - it's probably time for anyone who isn't reading comics on the internet (legally) to start doing so. You don't want to be behind the curve when your Ford Focus starts connecting to the internet and asking "Where do you want to go today?" You might be bored while it takes you to Target or Johnny Rockets. You don't have to be though. You do not have to be bored. 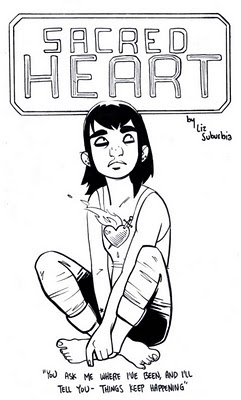 Liz Suburbia makes a great webcomic called "Sacred Heart." It is a kind of weird teen-drama where dead bodies show up and no one really freaks out too much. This doesn't mean the story is devoid of freak outs, or even appropriate (and definitely inappropriate) emotional reactions, because that stuff is in there too.
It reminds me somewhat of Ross Campbell's "Wet Moon" books, which are set in a small town as well, and contain a few or more "scene kids" just like "Sacred Heart" does. The art styles of both comics is somewhat similar, but only vaguely. Suburbia's lines are clean, and the art is partially cartoonish, without a great focus on photo-realism. A mood is set by the black and white art, especially with the blacks being so thick.
If you want to read about some kids acting like kids, maybe with a spot of adulthood blooming right in the middle of all the madness, then "Sacred Heart" is there for you. The main protagonist is a teenage girl named Bennie. She has a close relationship with her sister Empathy, and the chapters published so far look to be setting up something regarding their relationship, which is a great word to describe the theme or themes of this story. All of the characters within "Sacred Heart" have relationships with people, and Liz Suburbia shows us the gaps and connections that form and deteriorate. It's a pretty sweet deal for something free.
Along with telling an interesting story that could probably fall into the "slice-of-life" category, Liz Suburbia takes the craft and art form of comics and tells her story in an interesting way. There's an amazing sequence where one of the protagonists is getting ready for bed, and the story jumps from character to character, showing what each is doing at that exact moment. There are sad, funny, and uncomfortable moments shown, but Liz Suburbia manages to give a great representation of who these people are with nothing more than a panel.
Speaking of Liz Suburbia: she rocks. She works at a comic shop and produces this freaking good comic at the same time. She's legit. She posts art to her blog, and makes regular updates about being awesome and everything. Go check her stuff out.
* All art copyright Liz Suburbia, and appears here with her permission. (Note: The top image isn't from "Sacred Heart," but was posted on Liz's blog. I liked it too much to not include here.)
Posted by Hideous Energy at 2:19 PM No comments: 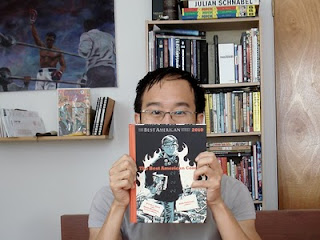 When Hideous Energy loves you they show that love by telling you over and over, until they eventually reach the level of creepiness seen only by overbearing movie boyfriends (see: Mark Wahlberg in "Fear"). Ask them to stop, or confuse them even more on Twitter, Facebook, or hideousenergy@gmail.com. Download the show on iTunes, and subscribe so you can get an episode delivered right to you. The guys promise they won't come in without knocking.

Episode 10:
• Intro: Singing and sweating! Yay!
• Topic Thunder: Ben Kingsley? (Jesus, what are we doing?); The Walking Dead's second episode hit TV, and we lose our minds (this means we talk about zombie physiology and gender issues, seriously); and we wax intellectual on Slice-of-Life tales. It is DEEP.
• Interview: Fred Chao! The creator of "Johnny Hiro" stops by and talks about everything, but mostly we make him talk about how much we love him.
• Top 5 - People Who Should Be Paranormal Detectives.
• Outro: We're talking to you, Geek Week.

David Hopkins and Austin Wilson walk the line. This sounds somewhat boring, but when you think about Johnny Cash doing it, that changes. Guest starring Caleb Schmreen! This show runs at a monstrous length of 1:56:12. Maybe go take a nap to conserve your energy for next week's show. It will be on iTunes. And in your head.

Joe Hill Tweets Some News - This Would've Meant Nothing Once 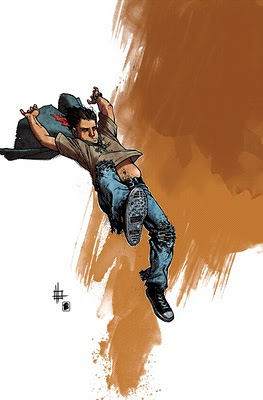 Twitter is a weird place. It is a confluence of opinions and odd notifications that could probably go unsaid for the most part. Its existence isn't pointless by any means, although it is an odd creation of a society that is increasingly relying on technology for absolutely anything it can supply.

We have a twitter account under the name of HideousEnergy, and it falls into the category of Things That Could Go Unsaid, or even Things Liz Lemon Said Once. At first both David and I didn't see too much of a use for Twitter, but as it has existed longer and longer it has forced itself into our minds, and a huge amount of others'.

News is now disseminated through Twitter, arriving in forms from unofficial to official, and the ever-present internet version of absolute bullshit. Twitter has become a huge part of the entertainment industry because celebrities adopted it as a way to have nearly constant contact with their fans. It helps the entertainers maintain a presence, and it helps fans be creepy and stalkery in a whole new setting.

Here recently there was some news revealed on Twitter by Joe Hill, author of two novels ("Heart-Shaped Box," and "Horns"), a book of short stories ("20th Century Ghosts,"), and comic book series ("Locke and Key").

"Just saw the finished proofs of Jason Ciaramella's adaptation of 'The Cape' for IDW. Pretty stunning," Hill said, referring to an upcoming adaptation of his short story "The Cape" from his collection of short stories, "20th Century Ghosts." Hill went on to say, "So stunning we're turning a 1-shot into a mini-series. Howard's art is so, so great & folks are gonna be wowed by Nelson Daniel's coloring."

Now, because of Twitter, we know that there are more awesome comics coming from Joe Hill, albeit through the circuitous route of adaptation. Jason Ciaramella has already co-written a one-shot with Hill, a book called "Kodiak."

If you're looking for a preview for what could possibly be in store for you when "The Cape" hits comic shelves, go read the original short story. Also, keep your eye on Twitter. You never know what you'll find.

- Austin
Posted by Hideous Energy at 7:53 AM No comments:

#009 - Normalcy Is a Debate About Cheese Being An Animal 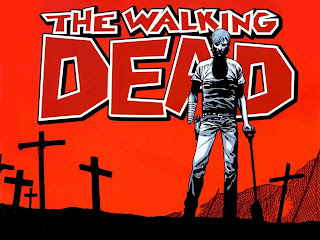 The debate about what animals live where rages on within the confines of Hideous Energy. Drop us a line and let us know what animals you see wherever you live. Tell us about them on Twitter, Facebook, or hideousenergy@gmail.com. We finally defeated iTunes, and our show can now be subscribed to and downloaded through that glorious program. Now you can listen to us while you do things you'll never tell anyone about! Privacy is neat.

Episode 9:
• Intro: Animals, Ghostbuster references, and our friends Geek Week.
• Topic Thunder: Captain America pictures, including Chris Evans shirtless; the Walking Dead premieres as a TV show and even your grandma watched; and Marvel lied? Maybe.
• Gimme' the Goods: Austin talks about "100%" and David talks about "Spider-Man: Brand New Day."
• Normal Words: A brand new segment where we ask David's wife questions about this weird comic book world we live in.
• Couch Change: It is a huge week, with tons of stuff to buy. Please don't rob people in order to get them.
• Outro: We never leave without saying goodbye.

David Hopkins and Austin Wilson could potentially be under extraterrestrial mind-control. They say and do things and then later wonder why they acted that way. This show runs 1:04:24, and it is like a freight train in your brain. Come back next week! And go check us out on iTunes!

Posted by Hideous Energy at 7:52 AM No comments: